This is the British variant of Cricket the game played in the USA.

To score points you’ll need a green crossed circle, meaning having thrown that particular number with three darts, before your opponent has done so. Treble counts as three, double counts as two darts.

Use the fully customised keyboard by tapping your number and if thats correct tap ok. If you throw a double tap double, and then your number and the ok. Same goed for treble. If you throw a number which is not in the game like 9, or if you miss the board completely tap miss and then ok. The last one is important since the app has to keep count of the number of darts thrown.

After the first dart one stripe will appear:

If you hit the target a second time a cross will appear:

And after the third time a crossed circle will appear: 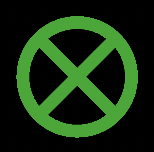 You win the game when you have closed all numbers and you have more points than your opponent.